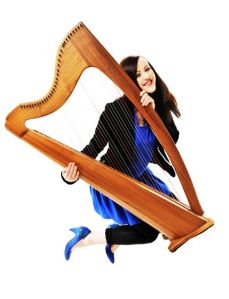 1) First of all, congratulations on this new recording.Tell us, how was the creative process and the recording of “No more Wings”? What do you want to share with us about this new CD?

This is the first cd I’ve done with my current line-up and it is the first cd that has truly been a trio effort. My first album “Hubcaps and Potholes” was a solo cd, and my second album “The Lucky Smile” had a mixture of group and solo tracks on it.

We had a mixture of tracks that we have been playing concerts for several years now and were exicted to finally be able to record them and then other tracks we arranged specifically for the album recording in a week of rehearsals that was done before we went into the studio.
Jenn and I tend to sit and work out basic chord accompaments and arrangements for the tunes and then later Euan comes in and we develop the tunes further with his input.

2) How was your life from the moment you decided to study harp? How did you start and who were your teachers?

I was born and brought up in the village of Ullapool, in the Highlands of Scotland. There was lots of traditional Scottish and Celtic music in the area so I was surrounded by it from a young age. I begun harp aged 10 after attending a summer school in traditional music called “Feis Rois”, where the teacher was Corrina Hewat. I really enjoyed myself so my parents hired me a harp and I started weekly lessons with the Americian, now living in Scotland, harpist Bill Taylor.
When I was 16 my family moved to the city of Edinburgh and I got lessons at school from Charlotte Peterson and Margaret Collins.
Throughout my school years I still attended “Feis Rois” in my holidays and had many harp teachers there and also loved playing alongside some fantastic traditional musicians there.
A big turning point for me was when I was accepted to study music at the University of Strathclyde in Glasgow. It was a unique course where traditional Celtic musicians studied alongside jazz, classical, rock and pop musicians. This opened my mind to many different styles of music which have each influenced my playing in their own way.
During this time I studied with the world renowned Scottish harpist Corrina Hewat. She was very influential to me as she taught me to develop my own style of playing.

3)Which is the main difference between “No more wings” and your past CDs? How can you describe the evolution of your music?

No More Wings is the first album that I have recorded with my trio, and it is very much a “trio” album, as we all play on each track. Jenn is a fantastic singer so we have been able to record some songs on it too.

We’ve been playing together for around 3 years now and are very comfortable and confident with our music and I think this shows in the cd.
It also isn’t what you’d expect from a normal harp cd. There are lots of upbeat tunes and not so many big slow airs!

Jenn and I studied at University together and have played with each other on a casual basis for years. She “officially” started playing with me 3 years ago after my previous guitarist Paul Tracey moved onto different projects. Euan has been playing with us for around 2 years. He used to stand in for our previous bassist James Lindsay when James was busy playing with his other band Breabach. It was only natural that when James became full-time with Breabach that Euan take over and join us on a permanent basis.
Euan comes from a jazz background, so that’s been fun to experiment with on the new album.

On the album we also have our produced Angus Lyon who plays accordion and Rhodes on a couple of tracks. I’ve known Angus for years so it was great that he was able to play on a few tracks. Fraser Fifield is a well-known Scottish musician famed for his cross-over between Scottish and jazz music. We were very excited to have him play soprano Saxophone on some of the tracks.
Signy Jackobsdottir is a Scottish percussionist who is originally from Iceland. She is incredibly creative with her percussion and helped make some of tracks even more interesting.

5) In the track list we can see  there’s a combination of tunes from very different backgrounds, some of them are traditional from different countries, an another  few were composed by you and also by Jenn or other composers… How did you make the selection?
In the trio it tends to be me who chooses the tunes(melodies) we play and Jenn chooses the songs we play.
For some of them, I wrote them specifically for the album, and I had a certain style in mind that I wanted to write them in. Others are tunes that we really like to play, and we’ve then tried to find other tunes that go after them. A few tunes (the Swedish tunes and Alistair m’ annsachd) I sourced from collections of old folk tunes. I like to spend time playing through these old collections and finding old tunes that haven’t been played for a very long time, so that we can help bring them to life again.

6) How many harps do you own? Which are your favourites for recording or when and which for playing live?
I own two harps, both “Glenelle’s” made by Starfish designs, who are based in the village of Ballachulish, 2 hours north of where I live in Scotland.
One is in Walnut and one in maple. They have both been hollowed out inside to make them lighter, and easier to travel with.
I actually used both of them for the recording. The maple harp has a richer sound where as the walnut one has a brighter sound. I tend to use the walnut harp when playing live as it is 2kgs lighter that the maple one and easier to fly with .

I love playing starfish harps as they are perfect for my style of playing. Starfish are also very supportive to me as a musician and I work with them in the development of new harps and accessories, such as the flight case they have made making it a lot easier for me to fly with my harp (it only weighs 20kg in it!)

7) In “No more wings” you have recorded an interesting version of “Cancro Cru”, a tune composed by Anxo Pintos (Berrogüetto). When did you first listen to this tune, and why did you decide to include it in your repertoire?

I was taught “Cancro Cru” by Irish harpist Laoise Kelly about 7 years ago now. We were taking part in a special concert at Celtic Connections festival called “Master and Apprentice”. Laoise was my master so we worked on some new tunes together. I fell in love with the tune and recorded it on my debut solo album. When I begun playing with Jenn and Euan they also fell in love with it, so we have re-arranged it for the trio. Its one of our favourite tunes to play live so we really wanted to record it again for the new album.

8) Which harpists are your role models? Do you know any Spanish harpist?

I have many harpists that I admire… Corrina Hewat, Laoise Kelly, Catriona Mckay and many more. I have really being enjoying playing with Breton harpist Tristan le Govic over the past while. We performed a dup concert at the Dinan Harp festival in Brittany and the Lorient Interceltique festival last year. I love Breton music and really enjoy playing with Tristan as he’s such an energetic player.
I’m afraid I am sad to say I have never heard any Spanish harpists live! I do know of Xabier Gomez and his work.

9) What’s your opinion about the current situation of the celtic harp and its role in the Scottish folk music?
The harp is a popular instrument now in Scotland although there are no professional male players…. They are all female! The players in Scotland are very innovative and many, such as Catriona McKay, are pushing the boundaries of the harp, showing it in a new light and performing new music on it using many innovative techniques.